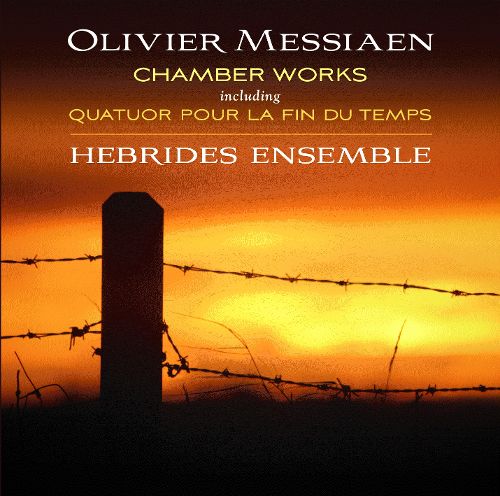 The internationally-acclaimed Hebrides Ensemble release Messiaen: Chamber Works to celebrate the centenary of the innovative composer. Including Quatuor pour la fin du Temps and the recorded premiere of Fantaisie.

Originally released in 2008 Messiaen: Chamber Works has been re-issued as part of Linn’s ECHO series which offers a second chance to enjoy the best of the label’s award-winning catalogue.

Released to celebrate the centenary of the composer’s birth, this new recording of Messiaen’s chamber works, including the premiere recording of Fantaisie, is a comprehensive collection with highly informative booklet notes by Messiaen expert Nigel Simeone. Messiaen: Chamber Works marries the chamber works of one of the finest 20th century composers with the renowned interpretive skills of contemporary music specialists the Hebrides Ensemble. Quatour pour la fin du Temps, written and premiered in a POW camp, is one of the most remarkable works to have come out of World War II. The Hebrides Ensemble powerfully conveys its apocalyptic inspiration and message of faith.

Messiaen: Chamber Works includes the first recording of Fantaisie, a work for violin and piano, thought to be lost until it was re-discovered by Yvonne Loriod-Messiaen and then published in 2007. The Theme and Variations was Messiaen’s first piece of instrumental chamber music and was considered by the composer to be one of his best.

‘…these are superb performances…placing this firmly among the best accounts on disc.’ BBC Music Magazine

‘…vivid, beautifully judged performances from the Hebrides Ensemble…’ The Guardian

‘This disc is more than just a premiere recording. This is special playing from a special group of musicians.’ BBC Online

‘Absolutely captivating and a wonderful contribution to the centenary of Messiaen’s birth – highly recommended.’ SA-CD.net