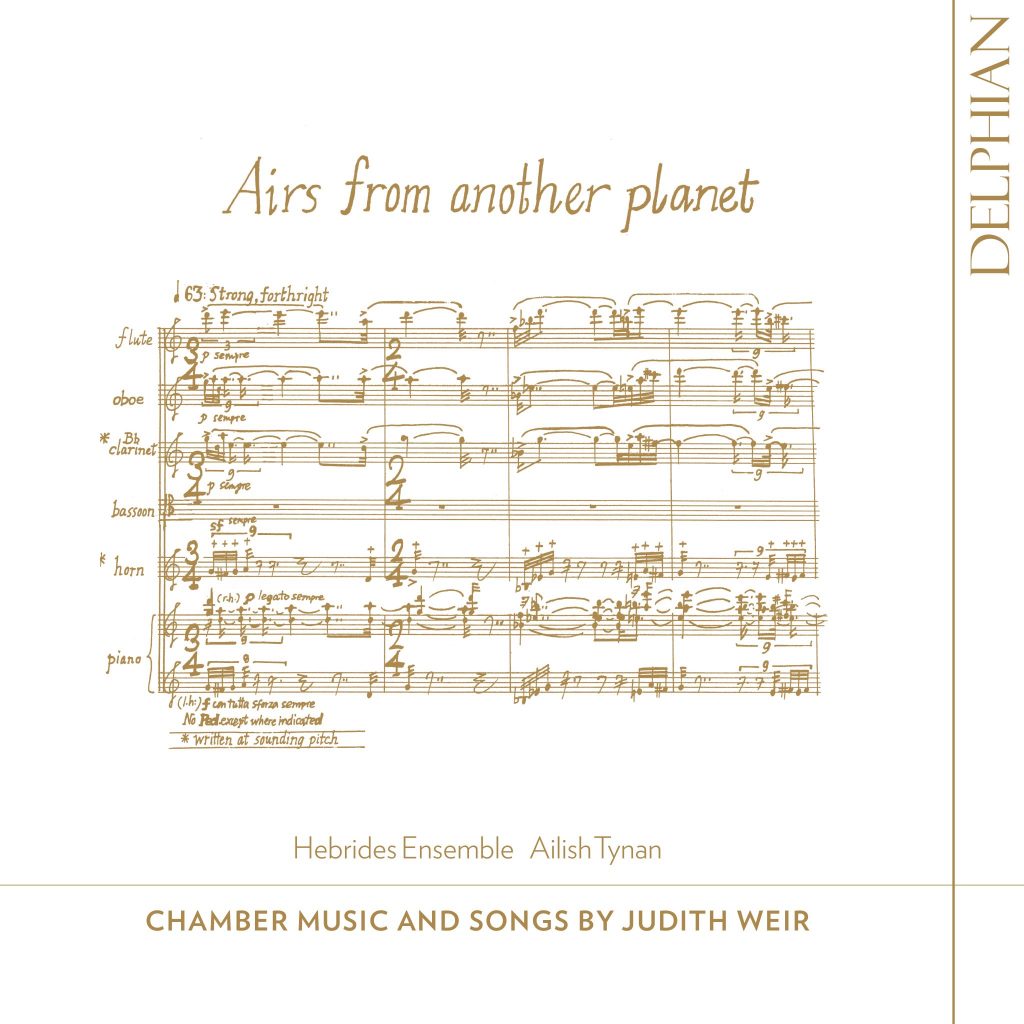 This survey of Judith Weir’s often quirky and always engaging music displays some of the concerns that unite her writing for voice and for instruments: storytelling and the gap between truth and fiction; invention and fantasy; the lessons that can be learned from other times and other cultures.

Communication between generations, continents and women lies at the heart of Nuits d’Afrique, conceived as a companion piece to Maurice Ravel’s Chansons madécasses. Its dedicatee, Ailish Tynan, joins the outstanding Hebrides Ensemble players here and in Really?, a resonant sequence of folk-tales set in an idiosyncratic mixture of speech and song.

The hymns of the medieval Rhenish saint, poet and composer Hildegard of Bingen underlie two recent chamber pieces, while the early Airs from another Planet imagines how Scottish folk music might sound after several generations of evolution in outer space.

“This exquisite collection of chamber works offers a bold and beautiful journey of imagination … Beautifully performed throughout, this is a disc resplendent with imagination and refreshingly alive to the power of music to tell stories” — **** BBC Music Magazine

“Ailish Tynan, the singer at the premiere, and flute, cello and piano from Hebrides Ensemble have been rewarded with one of the most enjoyable song-cycles of recent years … all pieces on this disc are vintage Weir, so economical in their acuity, and sparklingly performed.” Gramophone Magazine

“The master of the Queen’s music’s witty, economical art comes over touchingly in this seven-work sample.” The Sunday Times

“Weir’s sounds themselves are often guilelessly bright and simple, though with a dark undertow that seems to issue from some ancient folk tap-root…the performances by Irish soprano Ailish Tynan and Hebrides Ensemble have exactly the right razor-sharp purity and knowing innocence. Thanks to them, the music’s subtle power to move, hidden at first under a dancing surface, gradually reveals itself.” The Telegraph

“The talents of the players of the Hebrides Ensemble shine here; their performance is excellent, as are the vocal talents, whether sung or spoken, of Ailish Tynan. Add to this the superb acoustic and recorded sound and you have a first-rate recording, which, if you don’t know Judith Weir’s colourful music yet, would serve as a perfect introduction. It is also blessed with very informative booklet notes which add to the enjoyment of this music. All those involved in this recording should be heartily applauded.” MusicWeb International