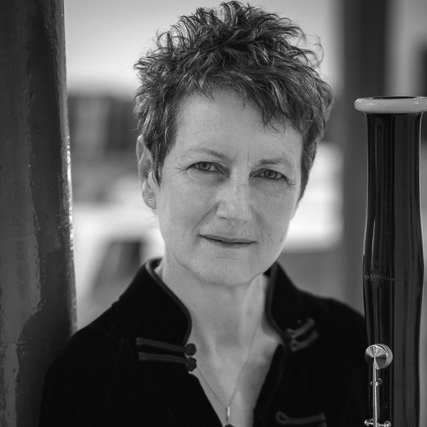 Ursula studied in Amsterdam with Brian Pollard, in London with Martin Gatt and studied Baroque Bassoon in the Hague  with Danny Bond. Whilst a student in London she won the Gold Medal in the Shell – LSO Music Scholarship.

She was a member of the European Union Youth Orchestra and worked with conductors such as Claudio Abbado, Herbert von Karajan and Leonard Bernstein.

Ursula is frequently invited to appear as guest principal with major orchestras and ensembles in Britain and throughout Europe. She is a regular contributor to BBC Radio 3 and her numerous CD recording include solo concertos by Mozart, Vivaldi and the Strathclyde Concerto No. 8 by Peter Maxwell Davies, which was written especially for her.  She can also be heard on the folk album Midnight May Monday and  on the sound track for the recent film of We’re Going on a Bear Hunt,

Ursula has given classes at all the major music colleges in the UK and as far afield as Toronto and Hong Kong and Melbourne.  She has been a member of the senior faculty at Marlboro Music in the US, has been a Jury member for the Munich ARD International Music Competition and Eurovision Young Musician.

She lives in the Lake District with her husband and daughter.